Realtek LAN Controller Problem on 8 Series Systems - LAN Reports not Connected, Is Missing, or no Traffic

Haswell systems based on Intel 8 Series / Haswell chipsets with a Realtek LAN Controller fitted may experience LAN connectivity issues after using out of date LAN driver software under Windows. These systems were shipped in 2014 and 2015.

​This problem does not appear on Haswell systems that only use an Intel LAN Controller.

The root cause is an out of date Realtek LAN controller driver which mis-programmed the LAN PHY chip. This mis-programming will survive cold and warm boots. The Realtek LAN driver on an 8 Series chipset based system should be updated to a November 2013 or newer version using the Stone Driver Finder.

If you have up to date drivers running on the machine and on any PXE boot or deployment system but are experiencing problems, then you are likely not affected by this issue. Please contact the Stone service desk for assistance for additional troubleshooting.

An example of a driver that may cause this problem is shown below: 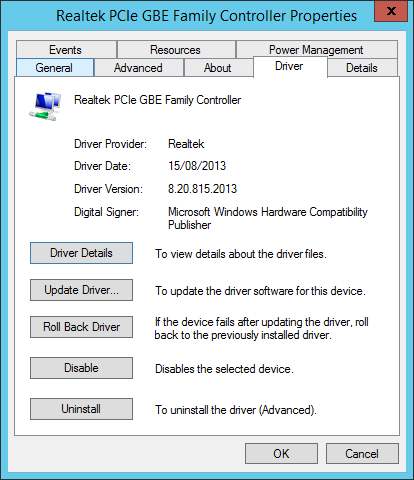 Note: Unfortunately the original component manufacturer's driver disk may contain a problematic, out of date driver. Please ensure you obtain all of your system drivers from the Stone Driver Finder or Stone Support.

The driver must be upgraded to a newer version, by obtaining a newer version from the Stone Driver Finder. If you need network connectivity to do this, you should do Step 2 first to regain some connectivity, then update the driver, and then repeat Step 2.

The LAN PHY chip must be reset. To do this after having updated the driver, perform the following: